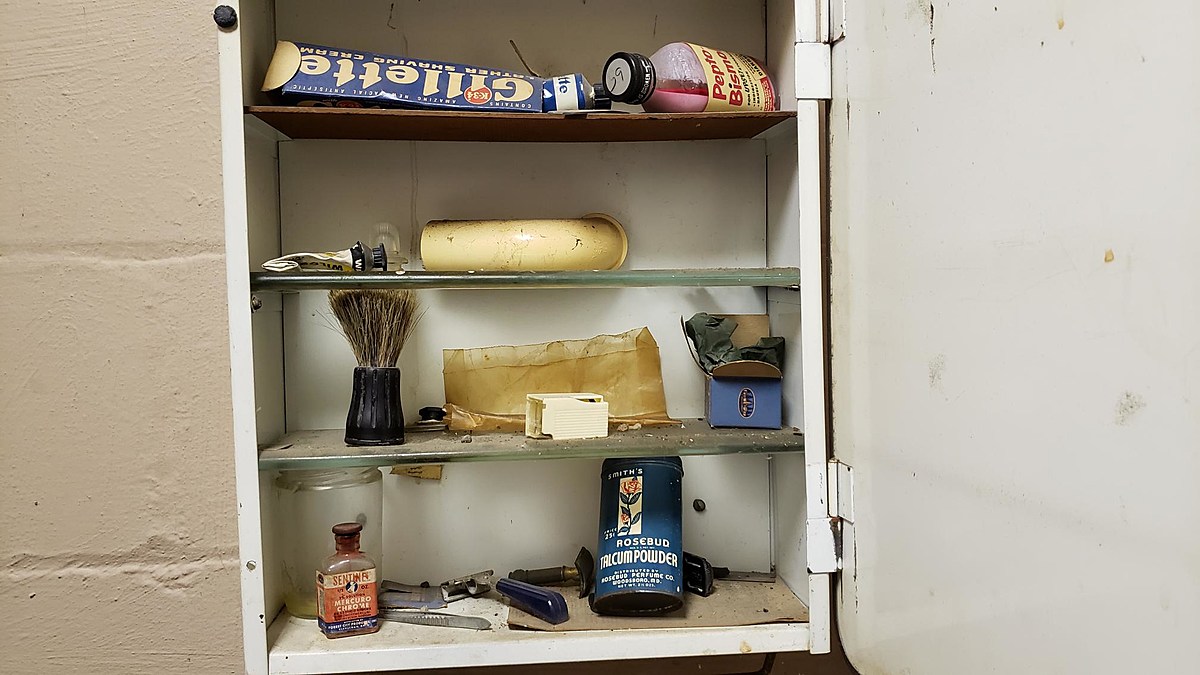 A forgotten medicine cabinet at work in Kalamazoo

If you read my articles here, you know I’m a huge fan of Facebook pages like Vanished Kalamazoo and several others, like Michigan History and Memories of Chicago’s Past. And it’s always fun to see a post from someone who’s found an unopened mid-century item or box. But it seems that it always happens to others. Well, this time it happened to me.

You may have seen my story from earlier this week about finding something to get rid of a wasp nest inside a satellite dish receiver. As my son and I were snooping around the back of the building at work looking for insect repellent and parts to create the biting stick, we found a room that looked like a small bathroom, just a toilet and a sink that probably didn’t have ‘I haven’t seen water in at least half a century, probably more. And there was a medicine cabinet.

Wow. There was old Pepto-Bismol, which had several shades of pink. There was “foam shaving cream” from Gillette. It was in a squeeze tube, not like today’s containers where you press the button and the frothy cream comes out. There were a few old fashioned long handled safety razors. This may be the only treasure we found. I googled and found one that was selling for almost $100.

There was also a badger, and, here, a breath of the past, “mercuro-chrome”. Amazon says the type they sell “is a mercury-free first aid antiseptic to help prevent skin infections in minor cuts, scrapes and burns. It is for external use only.” Probably a good thing, because while it’s not banned (to contain mercury?). maybe they just found better antiseptics. Finally, there was a container of talcum powder, which isn’t very popular either.

Well, the safety razor and mercuro-chrome were a blast from the past. I know this part of the building was freestanding in the 1950s but the station studio was above the State Theater so it’s not like anyone had to live here but who knows what the reason is toiletries.