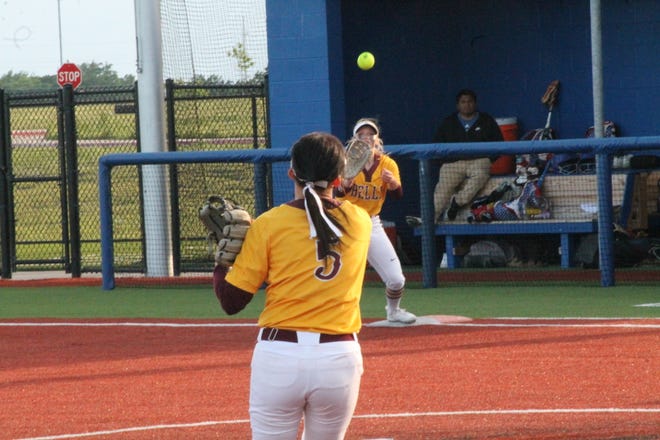 Bells drops bi-district series opener against Prairiland in 3A

NEVADA — Every turn in the batter’s box has led to an empty result for the Lady Panthers, whether it’s a left fly ball, a short groundout or an infield popout.

No matter what Bells did, it couldn’t solve anything McKenna Guest was throwing. And despite trailing just one run heading into the fifth inning, the Lady Panthers’ lack of base runners never gave them a chance to get on the board.

Guest, a junior who committed to Stephen F. Austin, pitched a perfect game with 14 strikeouts and also had an RBI single, walked twice and scored twice as Prairiland defeated the Lady Panthers, 8-0, to open a class 3A Region II bi-district series at Community.

“I knew she was a good pitcher. I was proud of the way we put the ball in play,” said BHS head coach Lisa Carter. “We had some good swings.”

Kyndal Yaross was 2-for-4 with a homer, a double and four RBIs while Jada Torres was 3-for-4 and scored for Prairiland (22-7), who are looking to eliminate the Lady Panthers for the second consecutive season.

Kylee Beach came out twice to go with a groundout while Kinley Weger had a nipped bunt attempt and nearly got picked on the left with two outs in the sixth but Lanna Riney caught it and Bailee Dorris sent a ball behind the third that Torres regained from his shortstop position before crossing the foul line for the second of the fourth inning.

The Lady Patriots closed the scoring in seventh on a two-run brace at center by Yaross.

Prairiland opened the game with a five-run fifth inning that showed his ability to play both short and long ball.

Torres singled between the circle and first base, stole second, and was sacrificed to third. An error placed the riders in the corners before Kirsten Bridges fell. Receiver Blair Baker faked the pitch first and tried to get Torres out of the third. The throw back to home plate came late as Prairiland extended their lead.

The guest had a short RBI infield single and the result of the play had two runners in scoring position. Bells nearly came out of the inning just 3-0 when Allison Choate swung to the right and the Lady Panthers had a chance for a double play on second but the throw to the base was wild and ended up a fly bag.

“They pressured the bases,” Carter said. “We were trying to be too fast. Focus on when we were and don’t try to do too much.

Yaross then homered a two-run left and Prairiland held on to a 6-0 advantage.

Chloe Russum held the Lady Patriots on a run for the first four innings. She put Prairiland in order in the first and fourth while working around a two-out walk by Guest in the third.

The Lady Patriots took a 1-0 lead in the second. Yaross hit an error to start the inning and Lexi Smith had a one-out single. After another defender was chosen, Riney scored on a wild pitch.

“I think they struggled with her at first,” Carter said. “She worked forward in the count. They had two hard hit balls. She did a good job. They figured it out a bit later. »