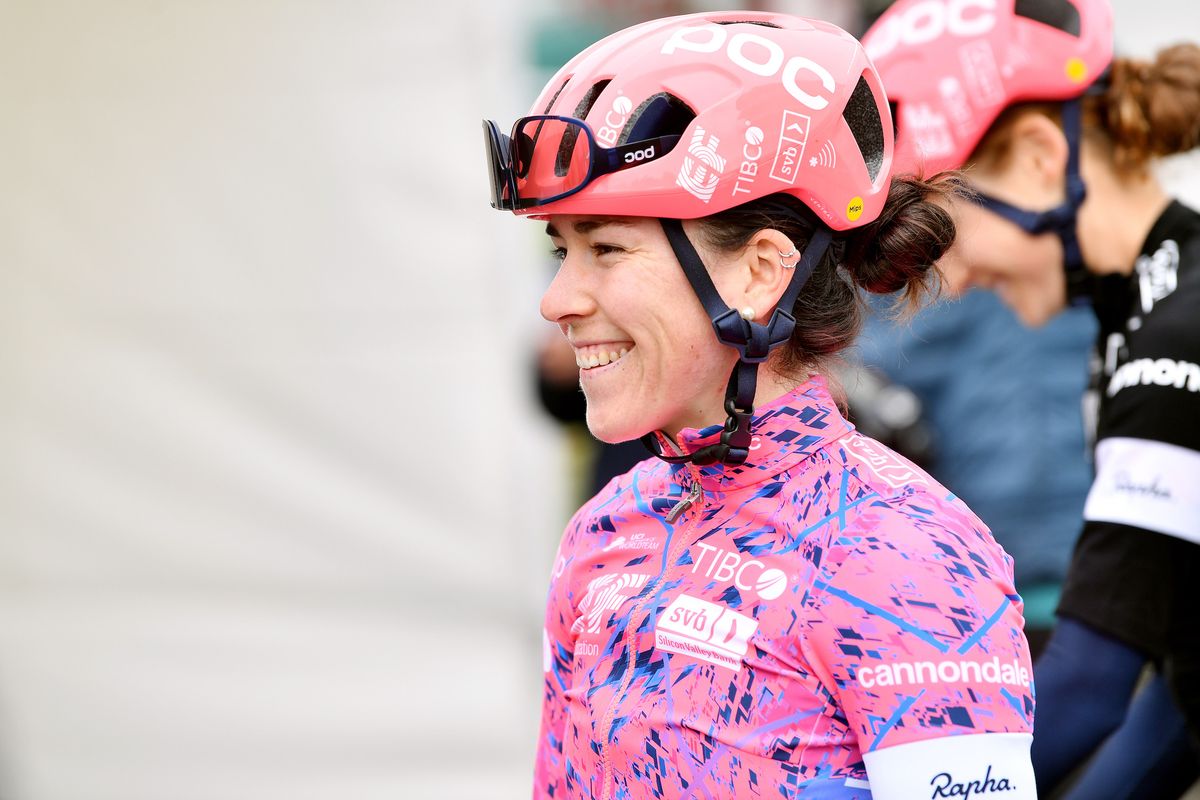 The US National Road Championship race was reduced to a mano a mano confrontation when, after spending some 50km in the breakaway, Emma Langley (EF Education – Tibco – SVB) gave a last-minute acceleration to overtake Lauren de Crescenzo (CINCH Rise) and make sure the Stars and Stripes jersey stays on the EF Education team.

“You never know what’s going to happen, and I don’t think it wasn’t until the last lap that I really believed we’d stay away, but it was pretty cool,” said Langley. “We had time gaps, and the gap was considerable. It was pretty good.”

The 26-year-old former swimmer waited for her and De Crescenzo to clear the final 500m of the race to launch her sprint against her breakaway mate to secure victory.

“I wanted to play to my strengths and I know Lauren De Crescenzo is so strong,” Langley said. “And if I was going to shoot to shoot with her on the last lap, I knew I wouldn’t make it, so we had to be tactical and let her do a little more work.”

Langley was born in England and has dual American and British citizenship. She lived in five countries growing up, but lives in Richmond, Virginia.

At the start/finish line, nearly every runner again took a knee in protest at the US Supreme Court’s decision to overturn Roe v Wade before the race. Despite a rest day between races, the struggle on the Sherrod Road on the first of 10 11km laps seemed to indicate a touch of heat fatigue.

Cinch Rise tried to make the competition last from the start by sending Andrea Fasen on the road, but this attempt was short-lived. The second time around the course, a large split in the field threatened just before the feed zone. But this group proved to be too large and the riders straightened up quickly enough to allow the peloton to reform. Alexis Ryan (L39ION of Los Angeles) and defending champion Lauren Stephens also flirted with a breakout with around 45 miles to go, but neither team was ready to commit just yet.

The rain started to lightly batter the road as Langley, Skylar Schneider (L39ION of Los Angeles) and Lauren De Crescenzo (Cinch Rise) pulled away from the peloton with 54km to go. That break quickly added up to nearly a minute on the court, and they maintained that advantage as they moved up Sherrod Road in unison. Former National Champion Coryn Labecki (Team Jumbo-Visma), running without any teammates, came out on top of the group to resume the chase. Nevertheless, the leaders pushed that advantage to 1:49 with four race laps remaining.

At that time, EF Education and L39ION withdrew most of their support during the hiatus. De Crescenzo was left to fend for herself, as the hunting party was largely disorganized and undecided behind them.

Langley and De Crescenzo were able to drop Schneider the next time out on Sherrod Road, but that effort also took a good 15 seconds from the gap. The field was whittled down to around 20 riders remaining with two laps to go, and De Crescenzo led Langley on the penultimate trip up the climb.

As he crossed the start/finish line for the bell lap, it was clear that EF Education had let Langley off the line and told him to prepare to contest the finish. Behind them, Labecki made a final effort not to let his chance for the starry jersey completely disappear on the road. Still, last year’s champion Lauren Stephens overtook her to provide EF Education with some insurance to win the bronze medal.

Langley, who was seated for the majority of the final two miles, was in an ideal position to jump De Crescenzo as the pair approached the short, punchy climb of Clinch Ave. Langley crossed the line with a healthy gap.

The U23 runners were mixed on the pitch but scored separately. Following her performance in the Time Track, rising star Zoe Ta-Perez (LUX-CTS p/b Specialized) was the first U23 rider to cross the line in downtown Knoxville, adding another medal to her week. . transportation. The 20-year-old won bronze in the elite time trial, securing gold among the U23 time trials and today won another U23 gold medal. Marije Bemis (Roxo racing) and Kaia Schmid (Human Powered Health) completed the podium in the U23 race, Maroad.