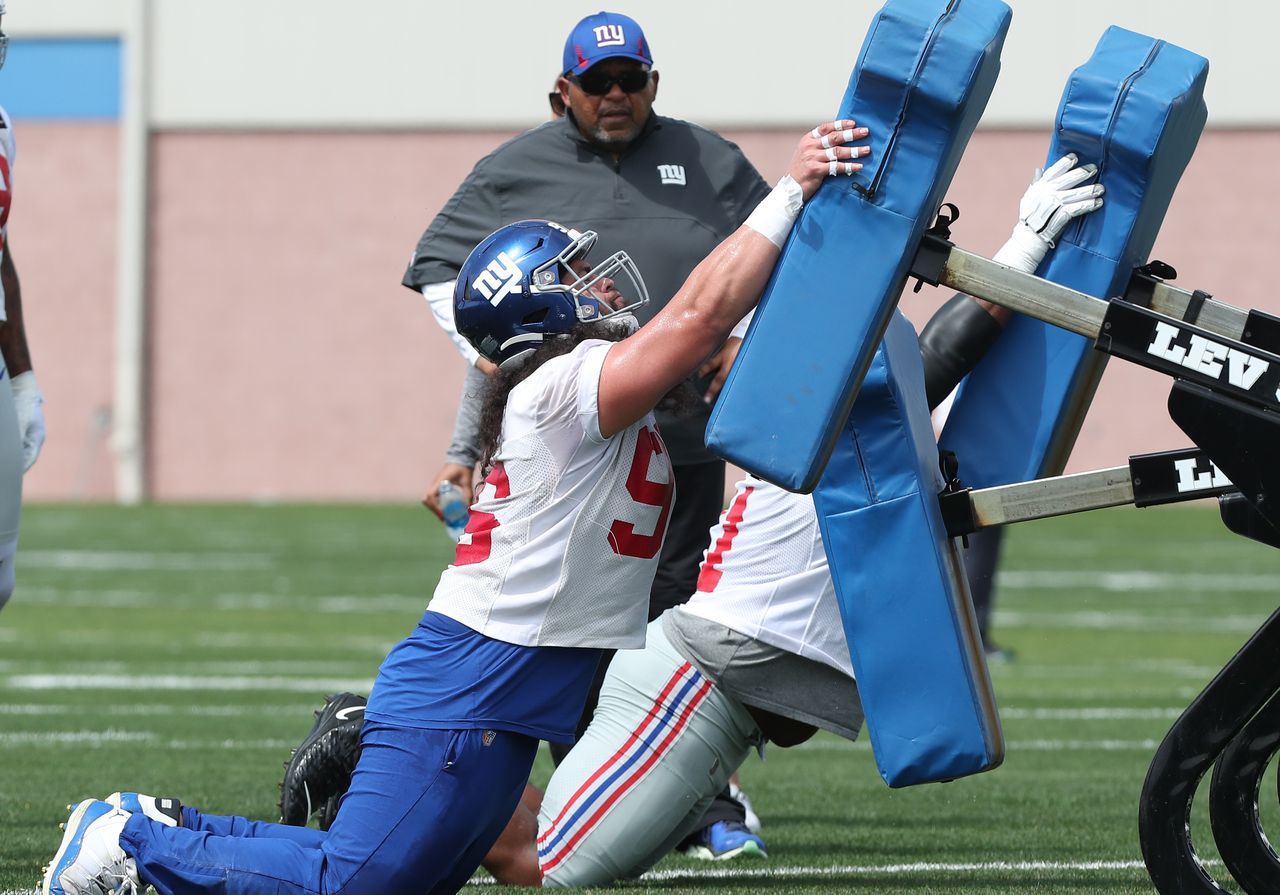 The Giants held their ninth (of 10) OTA practices on Thursday, although many of their most important players were absent due to injuries. So many Giants rookies — and other players fighting for roster spots — were able to get first-team reps on team drills they might not get on the roster. training camp.

“The more you can do, the better because you’re actually doing it,” Giants coach Brian Daboll said before practice. “It’s one thing to watch it on a (playbook). Even guided tours are useful for these guys.

So while the Giants’ first-team offense and defense didn’t look exactly like they will at the start of the season, this was an opportunity to get some valuable rep. And on Thursday, the Giants put more emphasis on team drills (all 11-on-11, not even 7-on-7) than individual drills during the two-hour practice.

Here are five observations from OTAs’ penultimate practice – ahead of the mandatory three-day minicamp next week:

– Daniel Jones‘ daytime: Any assessment of Jones during this round of OTAs comes with a caveat: he’s not working exactly with the guns he’ll be using when the reps start counting. Both Kadarius Toney and Sterling Shepard were limited (again) with injuries, while Kenny Golladay didn’t even show up in training. So most of Jones’ reps came with receivers like rookie Wan’Dale Robinson, Darius Slayton, and others like Travis Toivonen, Richie James, and Jones’ best friend David Sills.

Unofficially, Jones completed 18 of 24 passes in 11-on-11 drills. He should have thrown an interception at cornerback Adoree’ Jackson, but Jackson dropped the easy pick, thrown straight into his breadbasket. I’ve counted at least three places where Jones would have been sacked in a match-up situation, including by Leonard Williams who usually seems to dominate at this point of the year.

Jones also had a nice throw to Robinson in the end zone that hit the rookie’s hands, he let him down anyway. (There was a lot drops from receivers in general on Thursday.)

All in all a solid day for Jones, although hard to judge given he had an inexperienced rookie at left tackle and an odd collection of wides to throw. Jones threw it most often to Saquon Barkley, who had five catches on six targets. He also threw touchdowns to Daniel Bellinger, Richie James and David Sills.

Speaking of Barkley, these few weeks of OTA training have made it clear that the running back will be more involved in the passing game this year than he has been since he had 91 catches as a rookie. . And Daboll (as well as offensive coordinator Mike Kafka) are going to get creative with how they use him.

At the very least, this offense shouldn’t be as boring as it was under Jason Garrett and Joe Judge.

Daboll and Wink Martindale gave plenty of first-team reps to a few rookies in particular on Thursday.

On offense, fourth-round tight end Daniel Bellinger ran almost exclusively with the first-team offense. And there are no injuries to use as an excuse – Ricky Seals-Jones and Jordan Akins are both healthy and running with backups. I had Bellinger with two strikes on all three targets – the only miss on a throw from Jones who was behind him.

On defense, fourth-round safety Dane Belton got the majority of reps with the first team — both alongside fellow safeties Xavier McKinney and Julian Love, and sometimes instead of one of them. He will seriously push Love for playing time as a starter against McKinney. Cor’Dale Flott also got all the reps at the nickel corner, although that was partly because Darnay Holmes wasn’t in attendance.

Before we get to the question of who ran with the “runners”, let’s see who didn’t train:

On offense, the Giants were without Toney, Shepard and Golladay, and left tackle Andrew Thomas (ankle) remains limited. On defense, linebackers Blake Martinez and Kayvon Thibodeaux sat out, while cornerback Aaron Robinson joined him on the sidelines Thursday with an unknown injury. Holmes and safety Jarren Williams were also absent. Martinez watched practice from the sidelines as Thibodeaux and Robinson ran and practiced from the side with coaches.

Tyrod Taylor has been in a tough spot. He’s been running with the Giants’ backup offensive line and battered receivers’ corps, and neither is doing him much of a favor. He was constantly pressured, sacked, or the catcher dropped a catchable ball.

Slayton had two drops Thursday, one on a well-thrown deep ball from Taylor and another on a shorter pass from Davis Webb. Tight end Jordan Akins also dropped a pass from Taylor. I saw Taylor get fired at least three times, including twice by Elerson Smith.

Once the receivers are (hopefully) healthier from training camp, Taylor should have an easier time, though the backup offensive line unit may still be an issue.

• legend of the giants Michael Strahan was at training on Thursday and left the field with Joe Schoen and Brian Daboll.

• Daboll and Schoen were loved on social media Wednesday for their presence in the Rangers’ series opener win over the Lightning. There was a fun clip where Daboll was shown on the dashboard and pointed at Schoen, who the camera then turned to. The chyron only mentioned Daboll, however, and Schoen said as he left the field that the cameraman had no idea who he was.

• Strategist David Webb had a rough start to the day. On his first pass attempt, from his own goal line, he threw an interception at the line of scrimmage to the outside linebacker Niko Lalos. Webb’s favorite target otherwise: Alex Bachmannto whom he threw three of his five pass attempts.

• The Giants clearing unit is still getting used to working with each other. Bettor Jamie Gillanthe only punter on the list, kicked a 25-yard punt early in practice, and on another punt, Lalos – playing snapper – kicked it over his head.

• outside linebacker Elerson Smith was a standout, beating the reserve offensive line unit to get to Taylor on a fairly regular basis. He also got plenty of first-team reps with Thibodeaux. It competes with Jihad district and Quincy Rock for playing time behind Thibodeaux and Azeez Ojulari.

• Here’s what right guard Mark Glowinski thinks of the good tackle Evan Neal: “Just dominant. As long as he gets his hands on guys, that’s the end of the story. Glowinski said he took Neal under his wing to make sure they were on the same length of wave than the starters on the right side.

Please sign up now and support the local journalism YOU rely on and trust.

Zack Rosenblatt can be reached at [email protected].