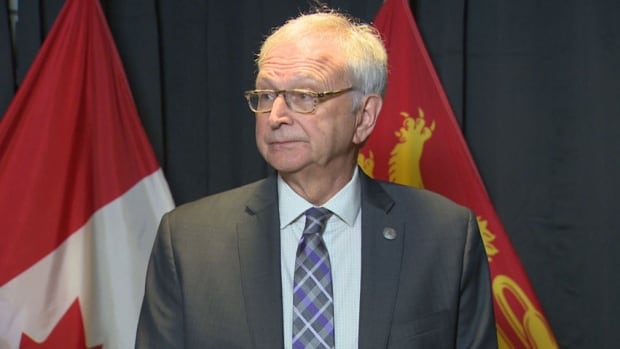 Premier Blaine Higgs fired his health minister on Friday and fired the CEO of one of New Brunswick’s two health care networks after worsening news on the health care front, including a ‘traumatic’ death in the waiting room of an emergency department.

Bruce Fitch is now health minister, switching places with Dorothy Shephard, who is moving from health to social development, Higgs announced at a news conference on Friday afternoon.

Higgs also announced that Horizon Health Network CEO John Dornan has been removed and replaced on an interim basis by Margaret Melanson, the network’s vice president of clinical services.

Additionally, Higgs said he revoked the boards of the Horizon and Vitalité health networks and installed a director for each in their place.

WATCH | “It starts at the top:” Higgs details changes to health care leadership

The prime minister announced on Friday that he was firing Horizon’s CEO and replacing its health minister.

“We have a plan,” Higgs said. “It must be implemented. The situation we find ourselves in today is the result of many, many years of successive governments refusing to deal with emergencies.”

Witness John Staples said the elderly man had been waiting alone in a wheelchair in visible discomfort for hours when he appeared to fall asleep. It was only during a routine check of people in the waiting room that a hospital worker realized the man had stopped breathing, he said.

Higgs said he was “appalled” when he learned a patient had died while waiting to be seen in an emergency department.

He said he had asked Horizon Health Network to undertake an investigation into what happened and that if he was not satisfied with the results, he would request an external review.

“I’m sure every New Brunswicker is saddened and concerned by this story. We all want to know that if we go to the hospital we will get the help we need.

Responding to questions from reporters, Higgs said he hoped the inquest would find out if hospital standards of care were not being met when the patient died in the waiting room.

However, he was quick to note that he does not believe the fault lies with frontline healthcare workers.

“I believe it’s a management problem. I believe there is no coordination of activities and that’s what I’m trying to convey here. If we don’t get better results from management in our hospitals, we will not get better health care.”

Higgs praised Shephard’s work during the pandemic and for his role in putting in place a new health care plan for the province.

However, he said, Fitch would take a “fresh look” at how the department measures performance and where the gaps in health care lie.

“In the case of Bruce’s membership, sometimes a change is, some would say, better than a rest,” Higgs said.

“Bruce is a seasoned person in government…he’ll work with people anywhere, like Dorothy was, but bringing a fresh perspective to, OK, how do we measure performance? How do we get results? Where did we fail to deliver and follow through on commitments made and what were the root causes?”

Instead of the boards of the two health authorities, Higgs said his government had appointed trustees Suzanne Johnston and Gerald Richard for Horizon and Vitality, respectively.

“We are fortunate to have two exceptional and experienced people coming out of retirement to help us through these difficult times.

The boards of health networks include members elected by the population and members appointed by the government.

Higgs said the two boards were revoked to make quicker changes to the two health authorities.

“We are taking a crisis management approach here to enable decisions to be made, to enable direct consultation with the appropriate people and to move forward.

“So we’re removing this situation of bureaucratic gridlock…and it’s not meant to be permanent but it’s about getting results. And right now I need to see results, and I want to remove the barriers and roadblocks for our healthcare professionals to reach them.”

Higgs said he didn’t have a timeline for when he expected the two directors’ results and was vague about their goals.

“There will be targets that we set there that we want to achieve first. So I can’t put a timetable, but I want to be clear on what the results have to be.”

Higgs’ announcement was strongly criticized by Jeff McAloon, chairman of Horizon’s board of directors until Friday.

“I am disappointed and discouraged by Premier Higgs’ unilateral decision to remove Dr. John Dornan as CEO of Horizon Health Network,” McAloon said in an emailed statement.

“I believe in Dr. Dornan’s experience and his ability to bring real, positive change to the provincial health care system.”

During the press conference, Higgs dodged a question about what Dornan failed to do in his role as CEO.

“I think what I’m demonstrating here is the need to get some grounding in terms of frontline workers in the case of Margaret Melanson and her role in clinical services and you know, how we can direct that. in hospitals,” he said.

“I think in every hospital there needs to be a clinical services manager who is really that gatekeeper of who comes in? Who goes out? What time is it? How fast are we going through this? And we have to get to work ground with it.

“For me, and for the partially elected local council I led, today’s announcement is a big step backwards,” he said.

“This represents the loss of community ownership and engagement and clinical leadership expertise.

McAloon said he had not heard of Higgs and only learned of his decision moments before the start of the press conference.

“I join all New Brunswickers in their feelings of shock and want nothing more than to see our system stabilized.”

Johanne Lise Landry, spokesperson for Vitalité Health Network, said in an email that the health network had not received any correspondence regarding the dismissal of its board of directors.

The medical community itself also reacted.

“Dr. John Dornan’s dismissal should be considered one of the most ill-advised, ill-advised, rash decisions I have ever heard,” tweeted cardiologist Dr. Robert Teskey.

Interim Liberal Leader Roger Melanson wonders why it took Higgs so long to do something about the problems in the health care system.

He said the premier has been in office for four years and needs to explain to New Brunswickers what his new plan is and why he thinks it will work.

But Melanson worries that attracting new doctors isn’t a priority for the province.

“We need healthcare workers to be able to provide these services, and they didn’t even mention it today at this press conference,” Melanson said.

She worries about the abandonment of partially elected health boards, a move she says goes against democracy.

“We shouldn’t be seeing more centralization of our health care system,” Mitton said.

“We should go the other way and have more local decision-making, power and resources.”

Melanson said he would like to see the legislature recalled to deal with the issue, which Mitton said she would support.