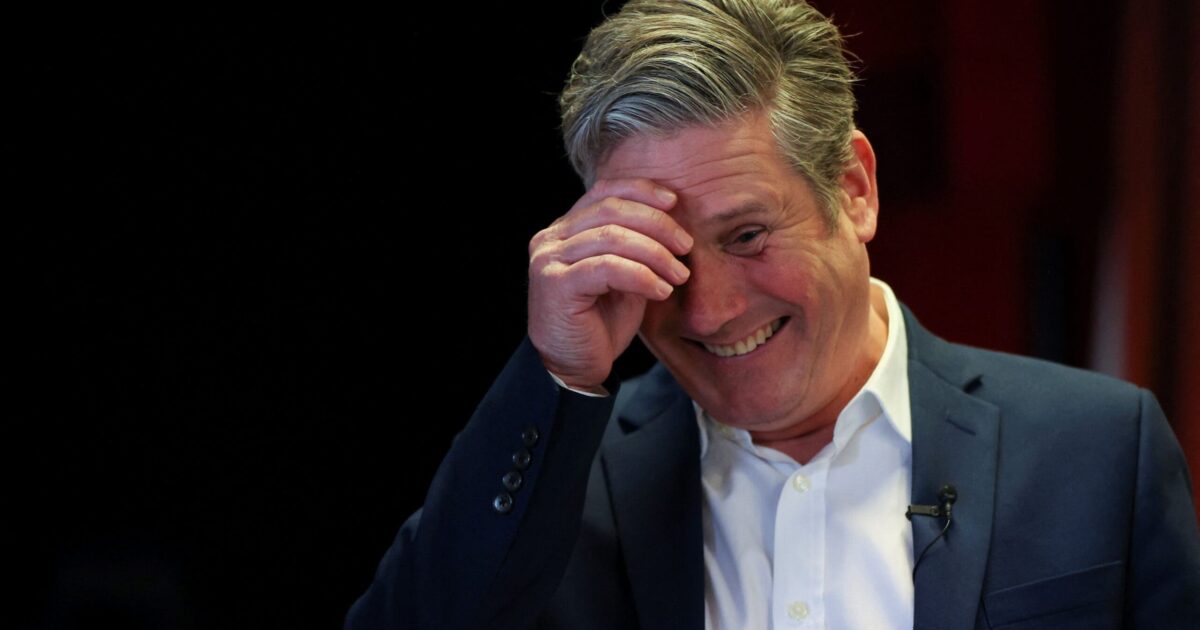 Keir Starmer gets a taste of his own police medicine

A political scandal for a bhuna and a bottle of beer. It is perhaps fitting that something so tedious could turn out to be the end of Keir Starmer’s equally colorless Labor leadership.

‘Beergate’, aka the question whether Starmer broke lockdown laws in April 2021 while eating a delicious Indian meal, growls. On Monday morning, the Times wrote that Starmer was considering pledging to quit if he is fined for the incident to ‘keep the moral high ground’ on rival Boris Johnson. Hours later, he did just that at an afternoon press conference, insisting that “no rules were broken” but saying that he was getting a fixed penalty notice, he would do the “right thing” and be on his way. Meanwhile, the Conservatives have been casually dismissing the line as “fluff” in the hope their benevolence will prevent Starmer from resigning and putting ever more pressure on the Prime Minister to follow suit.

The thing is, they’re right. The whole thing is dirty nonsense; imagine being a policeman announcing that you have received “important new information” and what you’re referring to is if someone opened a Google Doc before or after eating a curry. But Starmer is hoisted by his own firecracker; his tenure as Labor leader was characterized by the petty and punitive politics he honed while director of public prosecutions. At the height of ‘partygate’, Starmer’s attacks on Johnson rested solely on whether he had, in fact, broken the law, rather than examining how the law itself was arbitrary, contradictory and harshly applied. It was perfectly in line with the “punisher-in-chief” portrayed in Oliver Eagleton’s new book. The Starmer Project who oversaw the expulsion of a Portuguese man for take a single scoop of ice cream during the London riots in 2011.

Even Starmer’s beginnings as a human rights lawyer are easy to reconcile with his current trajectory. Like many institutionalized practitioners in this field, Starmer’s main passion is the law itself. He was prepared to fight for the “rights” of people as defined by legislation, but had little interest in challenging the institutions that produce faulty and unjust laws in the first place. It’s a spectacular failure of the imagination – an epitaph that could roughly sum up Starmer: he deliberately avoided previous opportunities to reframe the narrative around Covid-19 regulations in a way that would push policy dialogue around them to something constructive. And he’s the one who put him in hot water now.

After learning of police fines being issued to the Prime Minister and Chancellor, Starmer could easily have joined the coalition of justice organizations and parliamentarians who called for an immediate review of all fines and lawsuits related to Covid-19, demanding that financial penalties be repaid and convictions overturned. It would have been an approach that would have shown how regulation was a government failure, ushering in further criminalization and punishment of ordinary people at a time of great crisis. There was plenty of evidence he could have stood: Journalist Tristan Kirk’s touching work on individuals who broke the rules showed the human cost (like a lonely pensionerstruggling with debt, who was fined £100 for meeting friends in a housing estate), to statistics revealing that young men from minority ethnic groups were twice as likely to be penalized under rules than the general population.

Instead, Starmer hammered Johnson as morally wrong for failing to follow discriminatory regulations from the start, and illegally applied. Time and time again, he introduces himself as the school snitch, the Randall Weems of Westminster. It may be a position that sometimes strikes a blow at the dispatch box, but it hardly wins hearts and minds, like Labour’s mute display in last week’s local elections demonstrates this. Under Starmer, the party veered right to a particular form of narrow, NIMBY politics, as Labour’s renewed focus on ‘anti-social crime’, was completely demoralizing. Not only does this betray the petty stagnation of the political brains that decide the direction of Labour, it also encapsulates the prison bureaucracy that Starmer embodies. He’s a devil at the details, but he completely misses the big picture, the things that really matter to real, everyday people. If he goes over the beergate, it will be his own fate. Live by the sword, die by the San Miguel.

Moya Lothian-McLean is an editor at Novara Media.

2022-05-09
Previous Post: AUD/USD drops to yearly low around 0.6965 as DXY refreshes two decades amid flight to safety
Next Post: The total value of new homes delivered falls by £5 billion…