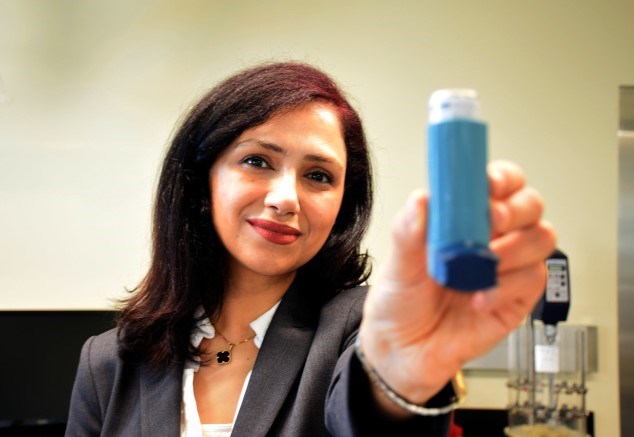 Leila Pakzad is among the recipients of new grants from the Natural Sciences and Engineering Research Council.

THUNDER BAY — A research team from Lakehead University is beginning a five-year project that could lead to improvements in the design of medical inhalers.

Leila Pakzad, an associate professor of chemical engineering, received $140,000 from the Natural Sciences and Engineering Research Council to lead this work.

Despite advances in inhaler technology, the effectiveness of drugs delivered by inhalers is currently only 10-50%.

Pakzad said the long-term goal of the research project is to link drug deposition in the lungs to inhaler design and operation, and ultimately drug deposition efficiency.

According to a statement from the university, the project will also provide important training, leading to the development of highly skilled personnel in areas such as drug delivery systems and advanced computer techniques, thereby supporting Canada’s future economic development.

Another Lakehead faculty member will use a $235,000 NSERC grant to study how the ecological limits of species are affected by rapid climate change and land use changes.

Over the next five years, Adam Algar and his team will use laboratory experiments, field studies, remote sensing and data modeling to explore what prevents species from spreading in all environments.

A statement from the university notes that understanding what limits – or promotes – the geographic spread of species can have far-reaching conservation, economic and health implications due to the effects on species at risk, the spread of invasive species and even the risk of infectious diseases.

“This research will shed new light on the mechanisms underlying species range limits and improve our ability to predict the geographic fate of species as rapid environmental change reshapes global biodiversity,” Algar said.

Noah Phillips, an assistant professor of geology, has been awarded about $143,000 to conduct a five-year study of the strength of fault systems at Earth’s plate boundaries, where tectonic plates slide past each other.

Fault systems are where the largest earthquakes occur.

Phillips and his group will study the forces of rocks deforming under high pressures and temperatures in the crust at depths of 10 to 30 kilometers.

“These rocks are slowly sliding past each other at a relatively constant rate to accommodate the movement of tectonic plates,” he said. “Understanding their forces is important because this slow creep charges the locked part of tectonic plates at shallower depths, which suddenly deform to produce earthquakes.”

Phillips said understanding how rocks and minerals deform is critical as it impacts society not only by producing earthquakes, but also by altering landscapes and forming/trapping mineral resources. and water.

The three grants are part of the $2.4 million awarded to researchers at Lakehead University by NSERC through its Discovery Grants Program and Research Tools and Instruments Program.