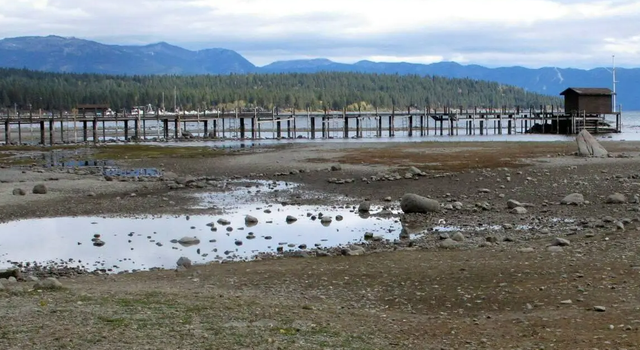 But when it comes to water spread over tens of square kilometers, that’s a lot.

And when those three inches represent the water consumed over the past year that hasn’t been replaced, you might want to think hard about what could happen.

Don’t be too smug if you live in Manteca or Lathrop.

Both towns rely on well water as well as surface treatment water from the Stanislaus River via the South San Joaquin Irrigation District.

Water levels in the underground aquifers that Manteca pumps are falling, as are water levels at the New Melones Reservoir.

And although water levels in Lathrop are not dropping as much due to salt water moving in to fill the void in the aquifers, the increasing presence of salt water is creating even more problems as it impacts potability and a sufficient amount can kill vegetation.

Of course, neither seems to worry many of us. Underground and surface water sources are both out of sight and out of mind. The aquifer is hundreds of meters below us and New Melones is 80 kilometers away.

What you don’t see – or in this case can’t see – can and will hurt you, your family, your neighbors and the community.

Make no mistake about it. We are in the third year of drought.

And at the same time, the evidence is mounting, we’ve been in a mega-drought for much longer.

Hydrologists have already recognized that the heartland of the Southwest – Arizona, New Mexico, southern Nevada and parts of Colorado – has been in a mega-drought for 20 years.

Lake Powell behind the Hoover Dam is at a historically low level. The dam that has tamed the lower Colorado River is set to become a dwindling source of hydroelectric power to further aggravate the growing energy crisis.

This matters for a number of reasons if you reside in Manteca, Ripon, Lathrop, and anywhere else in California.

First, in terms of climate and hydrology, we are part of the greater Southwest.

Second, it has been well established by dendrology – the science of reading past hydrology via tree rings using carbon dating – that mega-droughts typically spanning 50 to 100 years and longer, punctuated by periods of normal or above average rainfall, have been the norm. for thousands of years in what we call the American West which includes California.

Third, and arguably most important as this will at some point trigger drastic action in Sacramento, much of the water from the Colorado River normally ends up flowing through taps in Southern California.

The people and industry of the Los Angeles Basin, the coast south of San Diego, and the Inland Empire depend on water imported from the Colorado River, the Cascade snowmelt, and the Sierra snowmelt. Snowmelt on the western slopes of the Sierra is captured by the State Water Project. On the eastern slope, it is captured and diverted by the Los Angeles Department of Water and Electricity.

Manteca, Ripon and Lathrop are part of the Central Sierra watershed. People, farmers and businesses depend only on melting snow east of us. We do not mine snowmelt from the East Slope, Colorado River, or North Delta.

And – as crass as it sounds – there are far more “them” in Southern California than “us” in the northern San Joaquin Valley.

Rest assured that there will be pressure to keep SoCal closer to the whole in the event of a prolonged drought than in this region.

This is complicated for us due to the horse trade between the State Water Project (Oroville Reservoirs) and the Central Valley Project (New Melones, Shasta and Folsom) which will likely occur in an effort to protect the delta ecosystem and endangered salmon as the drought persists. .

Rest assured, there are those who are already watching New Melones and the water it stores to replace flow commitments to the Shasta, Oroville and Folsom Delta to shore up water commitments to urban users in southern California and the Bay Area.

It’s one of the many reasons why it’s insane that so many of us still waste water, whether it’s flooding gutters, being too lazy to turn off sprinklers after days when we receive a reasonable amount of rain, and wetting walkways and patios instead of pushing a broom.

In the years to come, we will likely become increasingly dependent on groundwater as political, bureaucratic and legal wars erupt over available surface water.

The truth about groundwater is that its supply dwindles with nature’s hydrology above ground with one inconvenient caveat.

The aquifers we have drawn from for 170 years in the American West were built over thousands of years.

The rate of depletion of higher groundwater sources is related to what happens on the surface. Less water on the surface means less water seeping into the ground – if any – to replenish underground water sources. But aquifers that are much deeper don’t rebound in a year or two of above-average rainfall.

This means that the longer we continue to drink water that hasn’t seen sunlight in centuries, the closer we get to a feast or famine state when it comes to annual rainfall and snowmelt. snows.

Once we get to that point, it’s not going to end well.

A prolonged drought destroyed the Anasazi civilization that thrived for centuries in the southwest. It was one of many regional civilizations that collapsed in what is now the United States during a drought that lasted 300 years.

Today, the civilization of the American West has become massive. Back when no one in what we call the Central Valley tapped underground water sources until the 1840s, estimates put the native population of the 450-mile-long region at less than the 88,000 people who inhabit Manteca today.

We have oversized water basins – the Los Angeles Basin is a prime example – far beyond the capacity of the local hydrology to support it with water.

This was done by unprecedented transfers of water from other basins to deep boreholes. And this deep drilling of water to sustain Los Angeles has happened on farm and desert land hundreds of miles away as extracted water is funneled in a futile effort to quench Los Angeles’ insatiable thirst created by a machine of growth that literally cannot be supported by local water resources. .

The sooner we realize water is precious and not something to be used absentmindedly on non-native grass that consumes an inordinate amount of liquid gold just to look pretty or to allow it to flow down the drain for no good reason, more soon we can reset water consumption to face the reality in which we live.

In other words, we ignore drought at our peril.

This column is the opinion of the editor, Dennis Wyatt, and does not necessarily represent the opinions of the Bulletin or 209 Multimedia. He can be reached at [email protected]