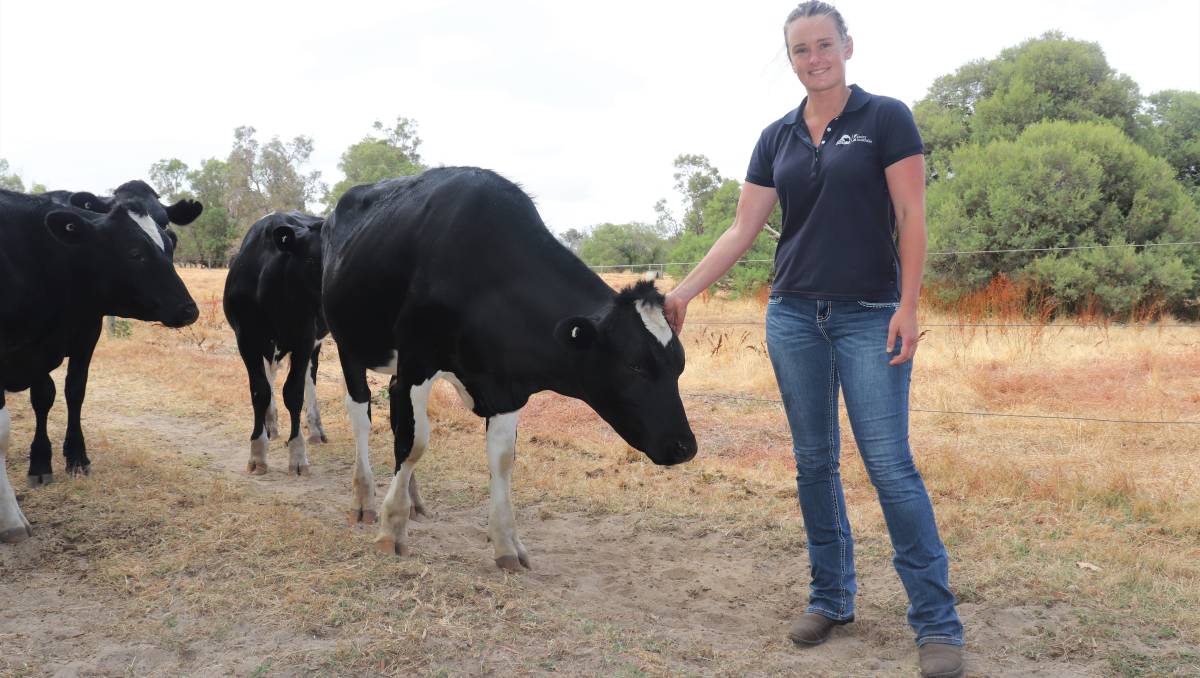 A LOSS for the medical profession has been the gain for the local dairy industry in India Brockman, Regional Extension Officer for Western Dairy.

She joined at a time when Western Dairy was undergoing fundamental change.

The old guard of Western Dairy management for more than 20 years, Esther Jones and Ms Brockman’s predecessor as extension officer for seven years, Jess Andony – both of whom have served the dairy industry extremely well – were moving , leaving a huge void in operational knowledge and experience.

Ms Brockman had only four years of practical experience on a dairy farm and new regional manager Julianne Hill, although very experienced in grain and cattle, was new to both dairy farming and Western Dairy.

But they had people like outgoing Western Dairy chairman Peter Evans, who is very experienced in dairy farming, the dairy industry and agripolitics, to guide them.

At the same time, the philosophy of the organization also seemed to be changing subtly.

Perhaps due to the strength of character of those involved, Western Dairy has always run its own program and operated as a complement to the national Dairy Australia organization.

Since 2015, he had been responsible for local industry and had taken over pasture trials and other scientific research from the Department of Primary Industries and Regional Development (DPIRD), after a previous state government decided to downsizing the DPIRD and outsourcing the administration of the dairy industry.

Since last year, Western Dairy appears to be moving under the umbrella of Dairy Australia, as a local WA branch.

Industry changes were happening around Australia – a code of conduct for supply contracts and plans being drawn up for a better future for the industry and for farmers – so Western Dairy shrewdly recognized that unity is strength and decided to rely on strength.

It was into this relative state of flux that Ms Brockman plunged last year when she joined Western Dairy, but she has thrived.

“I’ve been in this position for five months and I enjoy it,” Ms Brockman said.

“It’s partly a challenge – I organize the innovation day and it’s no small thing.”

Dairy Innovation Day on Thursday, May 12 will occupy much of his time until then, as the hugely popular annual industry showcase day takes on a new format this year.

Traditionally held at one or sometimes two nearby dairy farms, the event has become so large that it is unrealistic to expect farmers to offer their properties and open up to nearly 400 people.

So this year’s event will take place in Dardanup Hall, with afternoon bus tours to Depiazzi and Twomey dairies to inspect farm innovations and improvements, for those interested.

“Last year’s Innovation Day at the Haddons (Neville and Elaine Haddon, their son Garry and his wife Tiffany, who operate the largest dairy farm in the Busselton area) was so big and such a success that I have big shoes to fill.

“We took a different approach this year because last year’s was so big it was pointless trying to beat it – this shed (the Haddons’ new machine shed completed a week before the Dairy Innovation Day) was huge.

Ms Brockman describes herself as ‘well and really brought up for the country, not born for it’.

She grew up in Fremantle, but her paternal grandparents, John and Margaret, have a farm in Ruabon just outside Busselton and she lived there while working as a dairyman and calf raiser on local farms and now with her role based in Bunbury with Western Milkman.

“Every school holiday we (Ms Brockman is the middle child of three children) have stayed here), I’ve always been here to get thrown at the racehorses until they threw me”, she said.

Her grandfather, who will turn 84 next month, trained racehorses – he only stopped riding 15 years ago – and her aunt Tonia was a successful trainer.

“We would go down, I would like to take a pony ride but the pony in the stables is a bit satanic (Buzz pony is the same age as Mrs Brockman and used to keep the racehorses company in the chariot on the way race meetings) so dad would choose the nicest racehorse to work for me to ride and usually I’d get rid of it 10 minutes later,” she recalled.

The Brockman family were among the first settlers in the Southwest and their ancestry includes explorers and politicians.

Brockman Highway is named after the first members of the family.

“We (Brockmans) came here (Busselton) with the Bussells and the Malloys in 1834,” Mrs Brockman said.

“There are many, many and many Brockmans.

“What is now Provence (housing estate, East Busselton) was once the former property of Busselton Brockman – I don’t have such fond memories of being dumped by a pony there before development began.”

His maternal grandparents, the Simpsons, own a 3,000-acre wheat and sheep property in Three Springs.

But it was medicine, not agriculture, that initially attracted Ms Brockman, who graduated from the University of Western Australia in 2014 with a bachelor of science degree, majoring in human anatomy and biology.

“I was going to be a doctor, I thought,” she said.

But a gap year accident in Queensland resulting in knee reconstruction changed the course of his life.

“I went home and was stuck in a desk job for a while, until I couldn’t take it anymore,” she explained.

“Then I brought a friend who wanted to go up north (jillarooing) but was told to get some experience with cattle first, so she worked on a dairy farm and loved it.

“So I applied for a job at 6.30am and the farmer called back around 10.20am and at the weekend I was on the farm for a trial and two weeks later I had moved in with grandpa and grand -father to Busselton and milk .

“I stayed there for two years.”

This farmer was the current Vice President of Western Dairy, Andrew Jenkins, on a leasehold property in Yelverton.

“I moved into the calf area pretty quickly and did some tractor work as needed at wake time,” she said.

“For the last six months I was there Andrew had been back to his farm in Denmark so the team ran the farm (Yelverton) which was brilliant.

“But when Andrew and (his wife) Clare returned to their farm in Denmark, I had to leave because I wasn’t going in the cold there – it’s a beautiful part of the world, but too cold.

“I had a job offer at the health department at the time, but when COVID came around that didn’t happen, so I took a milking job with Pete Duggan on the dairy farm. of Cowaramup.

“The good thing about working at the Duggans was that Andrew had sold a lot of his cows there, so the first calf I raised I was able to follow up to Duggans and watch her calve with a heifer – it was beautiful, really satisfying to be able to do that.”

Ms Brockman also worked for the Haddons and the Merritt family at Elgin Dairies, before it was suggested that she apply for the position of Young Dairy coordinator.

His story of starting out with no farming experience and finding a niche in dairy is not unusual.

“It’s increasingly common for those who don’t come from an agricultural background to discover that there are many opportunities in agriculture, especially for women,” she said.

“Dairy products, in particular, are really good to boot.

“One thing dairy farmers love to do, I’ve found, is they love to teach.

“They are so generous with their time.

“If you want to learn, they are more than happy to explain how they do things.”

Want weekly news highlights delivered to your inbox? Sign up for the Farm Weekly newsletter.