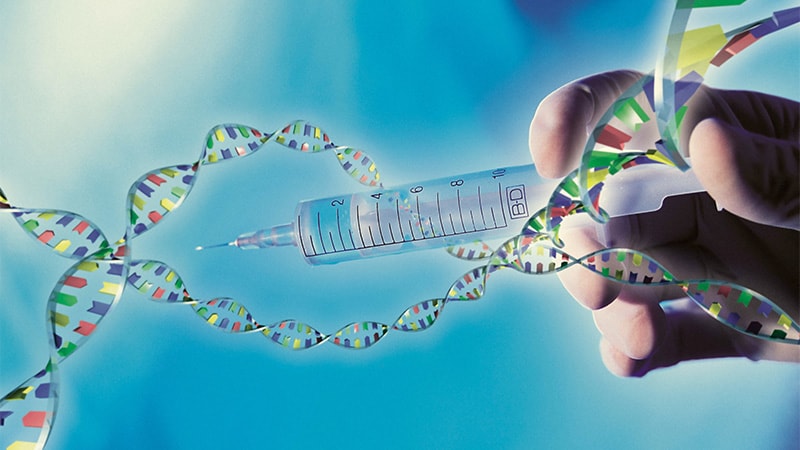 More injections after one-time gene therapy in hemophilia B

UPDATED July 27, 2022 // Editor’s Note: This story has been updated with additional comments from Dr. Pratima Chowdary, the study’s lead author.

Patients with hemophilia B meet a constant need for factor IX injections. But in 9 out of 10 patients treated with a new gene therapy, this need was eliminated.

The team reported new results with experimental gene therapy FLT180a in a published study July 20 in the New England Journal of Medicine.

“We found that normal factor IX levels can be achieved in patients with severe or moderately severe hemophilia B with the use of relatively low vectored doses of FLT180a,” the authors reported..

“In all but one patient, gene therapy led to sustained expression of factor IX, eliminated the need for factor IX prophylaxis, and eliminated spontaneous bleeding leading to factor IX replacement.”

FLT180a (Freeline Therapeutics) is a liver-directed adeno-associated virus (AAV) gene therapy designed to normalize levels of the factor IX protein necessary for coagulation; however, it is produced at dangerously low levels in people with hemophilia B due to genetic mutations.

According to the current standard of care, patients with hemophilia B require lifelong prophylaxis of regular intravenous injections with recombinant factor IX replacement therapy, and they often continue to experience potentially severe joint pain.

While factor replacement therapies with longer half-lives have emerged, prophylaxis is still invasive and extremely expensive, with an average price in the United States of $397,491 per year for conventional treatment and an average of $788 $861 per year for extended half-life. life treatment, according to a 2019 report.

Hemophilia B is a rare, inherited genetic bleeding disorder caused by abnormalities in the gene responsible for the factor IX protein, which is needed for blood clotting.

AAV gene therapy delivers a working copy of this gene directly into the patient’s tissues to compensate for the malfunctioning one. It leads to the synthesis of factor IX proteins and a single infusion of gene therapy can have lasting effects, the team explained in a press release.

The results they report are from the Phase 1/2 open-label, multicenter B-AMAZE trial. It involved 10 patients (all aged 18 and over) with severe or moderately severe hemophilia B, defined as having factor IX levels less than or equal to 2% of normal values.

All patients received a single infusion of gene therapy, at one of four doses of FLT180a.

All patients also received immunosuppression to prevent the body from rejecting vector gene therapy. These were glucocorticoids with or without tacrolimus for a period ranging from a few weeks to several months.

After FLT180a infusion, all patients experienced dose-dependent increases in factor IX levels. After a median follow-up of 27.2 months (range 19.1 – 42.4 months), almost all patients (9 out of 10) continued to show sustained factor IX activity.

Steady production of factor IX activity began at month 12, with low bleeding frequency eliminating the need for weekly injections of the protein in these nine patients.

The exception was one patient who required a return to factor IX prophylaxis. He had experienced a failure of the immunosuppression regimen due to a delay in recognizing an immune response at around 22 weeks after treatment, the authors report.

Treatment was generally well tolerated with no infusion reactions or infusion disruptions. At the study cut-off date, no factor IX inhibitors were detected.

Of the adverse events, approximately 10% were determined to be related to gene therapy. The most common event associated with gene therapy was increased hepatic aminotransferase, which is a concern with AAV gene therapies, the authors comment.

Otherwise, 24% of adverse events were determined to be related to immunosuppression and matched the known safety profiles of glucocorticoids and tacrolimus.

Late increases in aminotransferase levels have been reported in patients who received tacrolimus prolonged beyond the tapering of glucocorticoid therapy.

The only serious adverse event that was reported was arteriovenous fistula thrombosis, which occurred in the patient who received the highest dose of gene therapy and who had the highest factor IX levels.

The current results, along with data from another recent study of gene therapy for patients with hemophilia Apoint out that “immune responses may occur later than expected and may coincide with withdrawal of immunosuppression,” the authors warn.

“Consistent best practices for monitoring aminotransferase levels and deciding when increased ALT warrants intervention remains a critical topic for the field,” they note.

That being said, the future looks bright for the brave new approach to hemophilia treatment, Chowdary said.

“Gene therapy is here to stay!” she told Medscape. “We are now looking [the] development of new techniques to facilitate transgene transfer and increase the pool of patients and eligible children and adolescents.

In the meantime, patients in the ongoing B-AMAZE trial all remain enrolled in a long-term follow-up study to assess the safety and durability of FLT180a over 15 years.

The trial was sponsored by University College London and funded by Freeline Therapeutics. Chowdary revealed various industry connections. The full list of copyright disclosures can be found here.