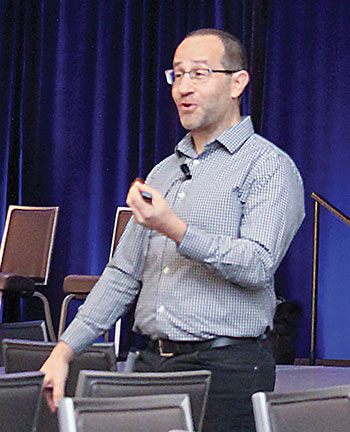 A miracle has happened in veterinary medicine. All student debt is gone, everyone earns triple their current salary, and no one works more than 35 hours a week. Oh, and no vet is ever overbooked, and clients can afford anything.

Josh Vaisman, co-founder of Flourish Veterinary Consulting, asked, “If that happened, do you think that in a jiffy everyone in veterinary medicine would be booming? Would we all be satisfied?

He said: “In 10 or 20 years, all the things that make our job difficult are not going to go away. This will always be a difficult area.

In his keynote, “Lead to Thrive: The 4 P’s of Positive Leadership” at the AVMA Veterinary Leadership Conference, Jan. 6-9, Vaisman said problem solving in the profession is not enough. Instead, veterinary organizations need to cultivate the things that contribute to workplace well-being.

Vaisman is a former practice manager and hospital owner with over 20 years of experience as a veterinary technician. He also holds a master’s degree in applied positive psychology and coaching psychology. And he’s a self-proclaimed “bad leader,” which led to him burning out and leaving clinical practice.

The BIG “problem” of veterinary leadership

Vaisman suggested that it is not enough to pay underpaid staff members more or give overworked staff members fewer hours – that is just the basics. Thriving at work means feeling engaged, fulfilled, responsible and feeling like you’re growing. All of this requires an environment that allows for the best parts of a person. Positive leadership helps leaders cultivate precisely that environment, he said, and helps practices retain existing employees.

“You can’t motivate another human being” in an energizing way, Vaisman said. Leaders can, however, cultivate conditions that make this kind of motivation possible. “We create an environment in which enthusiastic motivation is possible” because it supports the basic psychological needs of the employee.

Self-determination theory represents a general framework for the study of human motivation and personality. According to the theory, three basic human needs are autonomy, connection or relationship, and competence, or “the ability to lean into the discomfort of any challenge you face and know that there is also a system of support around you,” Vaisman said.

With these three things, intrinsic motivation is possible. People want to do something, and the more they do it, the better they feel, so performance and well-being improve. Without these things, there is demotivation or apathy. Vaisman also pointed out that it is not about extrinsic motivation, where a person feels coerced or compelled to do something. It may work up to a point, but it’s hard to stay powered up.

In veterinary medicine, Vaisman said, “We focus too much on compliance, rewards, policies and procedures. Like, ‘If I get into the nitty-gritty of what I expect of them, they’ll do it every time.’ But it doesn’t work, at least not in the long run.

The four aspects of positive leadership, on which Vaisman is currently writing a book, are:

He cited a study by Amy Edmundson, who followed teams of nurses in several hospitals. His hypothesis was that the most successful teams would make the fewest mistakes. The data showed, in fact, that the top performing teams seemed to make the most mistakes.

“They (high performing teams) have developed a culture to navigate the difficult space where, on the one hand, nurses are human beings and are not perfect, but also, in the medical profession, where mistakes are a big deal,” Vaisman said. . “It turns out they weren’t making mistakes anymore, they were admitting their mistakes more openly.

“The only way to improve systems is to see where we need to improve, and we can only do that if we are honest. If you deprive yourself of the opportunity to learn, it will get you in trouble.

Purposeful leadership is about leveraging the fact that what people do matters, then showing them how important it is. Experiencing meaning results in engagement, motivation, and satisfaction.

“The more we have that, the more we report having a sense of accomplishment in what we do. And the significance is a vaccine against burnout,” Vaisman said.

Intentional leadership practices involve noticing people, whether by making eye contact or discovering their interests; affirm people by highlighting their strengths or acknowledging the impact of their contributions; emphasize how important employees are to the team; and show team members how their tasks relate to important things.

He gave the example of training new customer service representatives and checking their daily checklist, which includes calling all customers who had an appointment the day before by 10 a.m.

Vaisman said: “What if you did that and added, ‘The reason we do it before 10 a.m. is because the doctors have their lunch between 10 and 2, and they’ll know during the break in their day if it’s there are clients to follow up with then and not at the end of the day. Plus, one of our values ​​is service, so calling them shows we take service seriously.

The third P, path, is primarily about clarifying expectations to empower employees. In other words, employees understand what is expected of them, they have meaningful control over how to meet those expectations, and they have the tools and resources they need to succeed. The best way to guarantee these things is with a consistent and effective program that is structured and individual.

“This means that as a leader you are regularly off the table, undisturbed and checking in with your direct reports at least once a month,” Vaisman said. Meetings should have an agenda, be rarely rescheduled or cancelled, be held regularly and be in the employee’s interest. The latter means that the meeting is not a performance review but a chance for the staff member to feel empowered or to request resources.

Vaisman worked with a large emergency practice in the New England area, which implemented a monthly check-in system for staff members. Those who said they felt resilient before the program made up nearly 50%, while 12% said they were really struggling. Eight months later, those struggling were down to just 4% and those feeling resilient rose to 74%, Vaisman said.

Finally, the partnership aspect of positive leadership means that leaders care about their employees, sincerely want them to succeed, support them, and show their appreciation.

“I’m not advocating creating a pampering relationship. You can’t be everyone’s best friend. If we’re the person with all the answers and we’re caring for someone all the time, we’re removing autonomy and creating learned helplessness,” Vaisman said. “On the other hand, don’t be a dismissive leader saying, ‘Don’t get me in trouble. Only bring solutions.’

Vaisman recommends leaders choose one of the four Ps to work on and then plan how to act. Start by considering what you’re trying to accomplish or what the goal is, he said. Then think about the practice or tool to experiment with, why this change is important to you personally, and how you will measure progress.

“Getting from where we are to where we want to be can feel like a chasm,” he said. “You have to build a bridge, but it happens one plank at a time.”