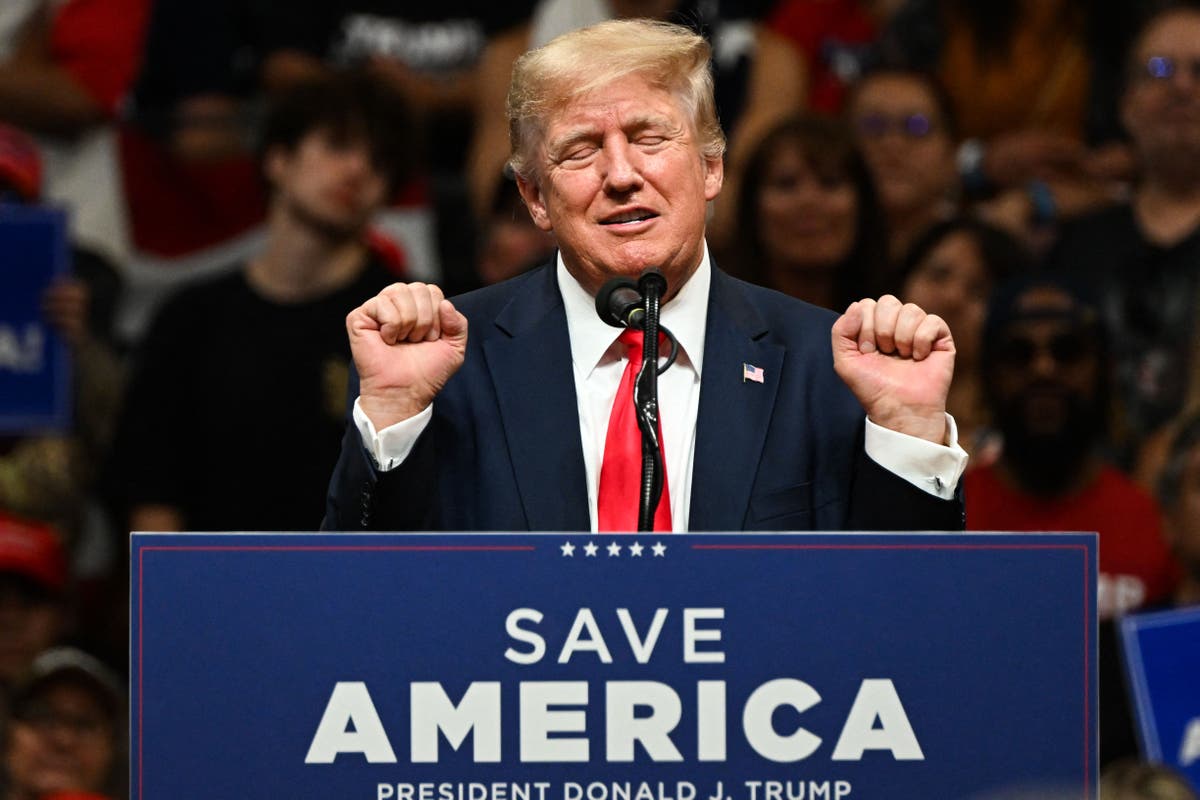 Trump drops a rare F-bomb at a rally in Alaska, prompting chants of “USA!” UNITED STATES!’

Donald Trump dropped a rare F-bomb during his rally in Alaska on Saturday night, prompting his supporters to erupt by chanting “USA! UNITED STATES!”

The former president, who is currently facing multiple criminal investigations into his business practices as well as a House probe into his involvement in the Jan. 6 Capitol riot, took to the stage in Anchorage on Saturday night to put their weight behind the upcoming Republican candidates. of the state primary next month.

At one point, Mr Trump told a rambling story about a time he said he visited Iraq and spoke to generals about the defeat of Isis.

He said one of the generals told him it would take years while a second vowed to “hit them in the fucking centre”.

Her swear word seemed to excite the crowd who erupted into cheers at the time.

As the cheers grew louder, Mr. Trump stopped and smiled, gazing out at the crowd.

His Iraq trip story came amid a rambling speech in which he denounced Elon Musk, told officers they ‘looked like Tom Cruise’ and refused to say the word ‘vaccine’ after being criticized by his supporters in the past for urging them to shoot.

At one point, Mr Trump also butchered the name of new Supreme Court Justice Ketanji Brown Jackson and celebrated climate change as a boon that would lead to “a little more beachfront property”.

“It’s not the worst thing in the world,” he said.

The former president has also repeatedly pushed his longstanding and refuted “big lie” that the 2020 presidential election was “stolen” from him.

Meanwhile, he rallied behind Senate candidate Kelly Tshibaka and House candidate Sarah Palin, calling the latter “a true warrior for your state and for the country.”

Mr. Trump’s appearance at the GOP rally comes ahead of two other public hearings this week by the House committee investigating his involvement in the Jan. 6 riot at the U.S. Capitol that attempted to overthrow democracy and undo legitimate results of the 2020 presidential election.

The first hearing will take place on Tuesday, examining evidence about how the mob that stormed the Capitol was rounded up, including a focus on far-right extremist groups such as the Proud Boys and the Oath Keepers.

A second session is also scheduled for Thursday.

On Friday, former White House attorney Pat Cipollone met with the committee for an eight-hour interview.