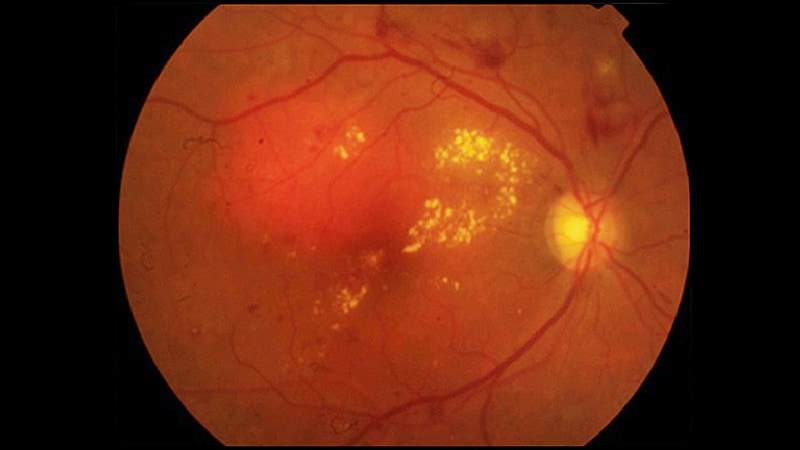 The efficacy, durability and safety of faricimab (Vabysmo, Genentech/Roche) for diabetic macular edema (DME) seen at 1 year extends to 2 years, according to the results of two pivotal trials.

As previously reported, in January 2022, the U.S. Food and Drug Administration (FDA) approved faricimab for DME and age-related macular degeneration based on 1-year Phase 3 results. YOSEMITE and RHINE and the TENAYA and LUCERNE Phase 3 trials, respectively.

These latest results show that “the safety, durability and efficacy observed at the primary endpoint (1 year) [with faricimab for DME] is maintained” at 2 years, said Danzig Medscape Medical News in an email.

The lesson RHONE-X The combined data extension study of YOSEMITE and RHINE will provide 4-year results, he noted, expected by August 2023.

“We now have a ‘longer lasting’ therapy with faricimab that has robust fluid resolution and an excellent safety profile,” commented Arup Das, MD, PhD, chair of the ADA session where the results were discussed. presented. “Thus, prolonged dosing is possible with less frequent injections.”

Das, of the University of New Mexico School of Medicine, Albuquerque, led early work on angiopoietin-2 (Ang-2) in retinal angiogenesis and diabetic retinopathy in animal models 15 years ago, which contributed to the development of faricimab. He was principal investigator for the one-year YOSEMITE trial and principal investigator for the RHONE-X trial, but was not involved in the 2-year data analysis of YOSEMITE and RHINE.

“Even if you add another target [Ang-2], you don’t get increased visual gain; it’s a non-inferior treatment, but the advantage was that you could increase the durability of the treatment, going to every 4 months,” Das commented during the meeting.

Das asked Danzig if he would use faricimab as a first-line treatment or for non-responders to anti-VEGF therapy.

Danzig replied that “it’s going to be a bit of both”. He noted that many diabetes patients have commercial insurance that is “hesitant to endorse some of the first-line branded drugs.”

However, diabetic patients have many doctor’s appointments, so “if we can put two less needles in one eye in a year, that’s a lot for that patient,” he said.

An ophthalmologist asked Danzig if he was going to go straight to the PTI dosing approach.

“The label goes from weeks Q4 to Q16,” he replied. “If you wanted to follow the design of the trial, you could do six injections every month, then every 8 weeks for the next one. [ones]but the label gives you flexibility.”

Another ophthalmologist noted that aflibercept was given every 8 weeks after initial doses, but in a retinal clinic patients are also given every 4 weeks, so they may have been undertreated. He also asked if there is any data showing that faricimab could benefit non-responders.

Danzig responded that the dosing range for aflibercept was based on the label. He noted that “22% of patients in the clinical trial were switch patients. But we don’t have that sub-analysis data yet. Anecdotally, in some of my patients at the clinic, I have definitely seen an improvement. »

YOSEMITE and RHINE recruited 1891 DME patients with macular thickness ≥ 325 µm and best corrected visual acuity (BCVA) of 25 to 73 ETDRS letters. The primary endpoint was at 1 year, but treatment continued through 96 weeks, with the last study visit at 100 weeks.

Patients were randomized into one of three groups:

Vision gains with either faricimab dosing regimen were non-inferior to aflibercept at 1 year, which was maintained through year 2.

There were greater reductions in macular thickness with faricimab with either dosing regimen compared to aflibercept through year 2.

More patients achieved freedom from DME and freedom from intraretinal fluid with either faricimab regimen compared with aflibercept through year 2.

Faricimab was well tolerated until the end of the study. No case of vasculitis or retinal occlusive vasculitis have been reported.

“The side effect of brolucizumab is retinal occlusive vasculitis in a minority of patients (2.1%) and intraocular inflammation (3.3%), as shown in a recent ad hoc analysis of the HAWK/HARRIER study in patients with wet AMD, which is not seen in faricimab-treated patients,” Das noted.

“So brolucizumab is still a safety issue for retinal doctors,” he continued, adding, “If I have to switch to another anti-VEGF drug in patients with DME, I would like to use a drug that is safer and does not have this problem of potential side effects.”

The study was funded by Genentech/Roche. Danzig said he is on an advisory board for Genentech and is a consultant for Adverum Biotechnologies, Genentech, Novartis and Regeneron. He also reports research support from Adverum Biotechnologies, Genentech, Kodiak, Novartis, Regeneron and Roche, and is part of a speaker bureau for Novartis. Das said he received grants from Genentech/Roche to be a principal investigator in clinical trials and from Novo Nordisk to be a PI for the FOCUS clinical trial, and received a grant from the National Institutes of Health and a VA Merit Review grant. .